History of tea, the short version

The world’s oldest cultivated plant is believed to be the tea plant Camellia Sinensis, which has been grown in China for about 2500 years.

It is said, however, that the tea plant was already known 5000 years ago. The oldest reliable information is from the year 221 B.C., where scrolls documenting the introduction of a new tax on tea were found.

Tea is served in China at every meal – before the food as a refreshment, and after dinner to help digestion. 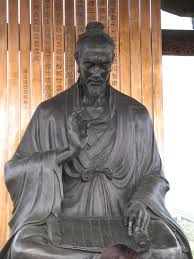 There are many stories about how tea was actually discovered.

According to legend, the Emperor Shen Nung (2737-2697 b. c.), who drank boiled water for health reasons, discovered tea.

One day some leaves blew from a tea plant into his cup and coloured the water. The Emperor liked the smell, and was curious. He tasted the coloured water, and found it refreshing.

Then it is said that every day he enjoyed the precious drink, as it became. The Emperor was so excited about his new discovery that he started the first tea production, and a long tradition was thus born.

The road to Europe

In the 1500’s the knowledge of tea and the properties of tea came to Europe with missionaries and sailors. Trade with tea started when Dutch merchants in 1610 brought the tea to Amsterdam.

It is assumed that tea came to Denmark from Holland and that its introduction and trade happened some time between the 1600’s and 1700’s. The specific date is not known.

The oldest teapots found in Denmark, dateback to 1665, which is also consistent with the spread of tea throughout Europe.

Before tea was introduced in Denmark, there was a tradition of boiling local herbs in hot water.

A fine and cultivated drink

Throughout the 1700’s, tea was really popular in Denmark as a fine and cultivated drink that was drunk instead of beer or liquor. The Danish-Norwegian author, Ludvig Holberg, praised the virtues of tea as a non-alcoholic drink which allowed the bourgeois ladies to make ten social calls a day without returning home drunk.

The tea trade flourished in the latter half of the 1700’s, particularly in Copenhagen’s old neighborhoods, where small garden pavilions began to appear because people demanded a lovely place to enjoy their tea. 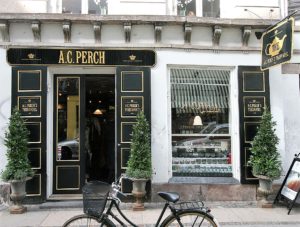 The teashop is still in Kronprinsensgade 5, just as it has been since the 1800’s.

In A.C. Perch’s they have maintained the old tradition of addressing customers with the more formal and traditional ‘De’ form of ‘you’. This more formal way of speaking is not used very often anymore in shops.

Don’t forget the candy, when visiting 🙂